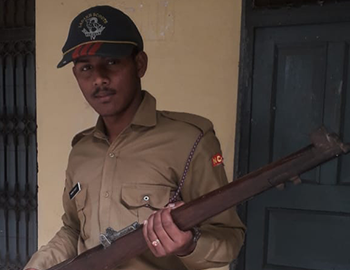 Pawan Yadav was enrolled in the school in Satya Bharti School, Gadhiya Rangeen, Jaitipur, Shahjahanpur, Uttar Pradesh in the year 2009. His father Ramveer Yadav is a daily-wage labourer and the only bread earner of the family.

When Pawan started his schooling, he was very shy student; however, he took a keen interest in sports. Initially, he had challenges performing on academic front but his teachers continued to keep him motivated. Soon, he developed his confidence and started performing well in academics too.

Pawan’s interest in sports kept increasing as time passed by. He participated in school-level and cluster-level sports activities. He even bagged the first prize in 100 metre and 200 metre races. Under his leadership, the school also won the prestigious Design for Change Award in 2014.In the year 2015, Pawan passed from the Satya Bharti School and got enrolled in C.A.S. Inter College Faridpur, Bareilly, where he joined NCC. He actively participated in many school activities, NCC camps and won many prizes. In consideration with his result oriented hard work, the NCC teacher appointed him as the Under Officer.

In class X, Pawan was selected as B.H.M.C. (Bhartiya Hawaldar Militry Commander) and C.H.M. (Company Hawaldar Major) in NCC, and trained about 1600 students. He got the first prize in 1600 metre at Division-level and the second prize in Boxing at State-level. Currently, he is training NCC students online through video lessons.